What Do Women Most Desire?

What do women most desire? Some would say the answer to this question is elusive, even though we have known for almost 600 years. Indeed, the answer was clearly shared within the 15th century romance tale – The Wedding of Sir Gawain and Dame Ragnelle. Few are aware of this important tale, but through unique advantages that I possess as a professor in a teacher credential program I have learned the secret.

One of my roles involves the supervision of student teachers. I set up student teaching placements in local schools, and then coach and mentor students toward mastering the essentials of teaching. One of the benefits of being a supervisor is that I get to be in classrooms. I get to observe classrooms in action. From the elegance of Math problems to the English class challenge of writing an impactful paper on the book The Chocolate War; from the fun of learning to hit a forehand on a tennis court in Physical Education to a Social Studies debate on the issue of building a wall along the U.S. / Mexican boarder, these are the kinds of rich learning experiences I get to observe. It is common for me, actually, immediately after leaving a classroom in which I have been observing, to get out my iPhone and order a book I just saw the classroom discussing. Their dialogue inspired me so much that I had to read it, too. Such was the source of my learning of The Wedding and, more importantly, the secret of what women most desire. For it was a high school English class that was studying the tale I am about to share with you. As a result of learning the secret, whether you are man or woman, your life may never be the same again.

The tale tells of an adventure during the time of King Arthur, a time when “chivalry was paramount.” It begins with King Arthur on a hunting trip. Separated from his knights while chasing a particular deer, he comes upon a knight not of his group, a knight of great might and fully armed. The knight intends to kill King Arthur for a wrong done many years before. Arthur delays the knight’s intention by talking with him and trying to convince him that it is no great thing to kill him when he isn’t in armor or armed really at all. So the knight agrees to let Arthur go for exactly one year, with the agreement that Arthur would return at the end of the year and tell the knight “what women everywhere love best.” If Arthur returned with the answer, he would live, otherwise he would die.

This Arthur agreed to, including that he wasn’t to tell anyone of their deal. But when he went back home many people could tell that he wasn’t himself. Finally, one of his most noble knights, Sir Gawain, approached him and asked what was wrong. Arthur ended up telling him about the unfortunate incident in the forest and the need for him to come up with what women truly desire most.

Gawain quickly came up with a plan. He would get on a horse and ride in one direction and Arthur would get on a horse and ride in the other direction, whereupon, as they rode far and near, they would ask people what their answer would be to this question. Surely, the answer would eventually come out of all this wisdom. The king liked the idea and they each set upon a journey of many months seeking the answer to this important, yet puzzling, question.

While on his journey Arthur met a lady that was as loathsome a creature as he had ever met. “Her face was red, and her nose dripped snot; her mouth was wide; her teeth were completely yellowed, and she had bleary eyes larger than a ball. Her mouth was overly large; her teeth hung over her lips.” There were many more details describing her foulness, but you get the picture.

Quite quickly the lady hailed the king and confidently explained that she knew the answer to his plight. She knew the secret; she knew what women most desire. “Grant me, sir, just one thing, and I guarantee you will live.” The king was not pleased with this lady, but he inquired as to what she wanted. In reply, she said “You must grant me a knight to marry. And his name is Sir Gawain.”

The king said he couldn’t do this and that it wasn’t for him to decide who Gawain would marry. But the lady was adamant, stating again that she could save his life. So the king reluctantly agreed to see what he could do.

When the king met Gawain he was discouraged, certain that he would die. Soon he shared with Gawain the offer of the foul lady and the deal she wanted in trade for her wisdom. As noble a knight as ever was, Gawain quickly agreed to marry her. “I shall marry her and marry her again. Even is she were a fiend. Even if she was as foul as Beelzebub. I will wed her, or could I really be your friend? 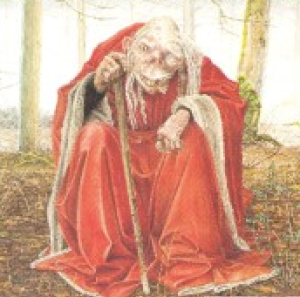 And so the king met again with the foul lady, whose name was Dame Ragnelle, and let her know that Gawain would indeed marry her. “Now,” said Arthur, “tell me your answer at once and save my life.” Ragnelle reviewed aloud many of the things that men thought women wanted – to be beautiful, to be in friendship with many wonderful men, to have pleasure in bed, to wed often, to be young, etc. “But there is one thing,” she said, “that we all fantasize about. Above all other things we desire from men to have sovereignty.” By this she meant that women want the ability to choose, whatever the situation may be. Sovereignty.

So the king went on his way and at the appointed time, exactly one year after first meeting the awful knight, met him where they had met before. Arthur told the knight what women most desire and the knight had to agree that it was a right and good answer. Arthur’s life was spared.

Gawain, though, believing in chivalry as he did, had to go ahead and marry Ragnelle. In spite of her ugliness, Gawain pledged his fidelity to her. People cried at the wedding for Gawain, but he married her nonetheless. During the reception banquet, true to her loathsome ways, Ragnelle ate more than any other guests. She probably ate more than any three guests put together. 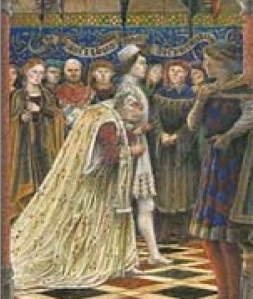 Later that night, Gawain and Ragnelle were in their chamber when Gawain turned to her and instead of seeing an ugly, loathsome woman, he saw the most beautiful woman he had ever seen. He rejoiced at her beauty, and embraced her, but she interrupted him.

“Sir,” she said, “thus shall you have me.
Choose one—may God save me,
My beauty will not be permanent—
Whether you will have me fair at night
And ugly by day to all men’s sight,
Or else to have me fair by day
And at night one of the foulest women.
One of these you must have.
Choose one or the other.
Choose one, Sir Knight, whichever pleases you more.”

“Alas,” said Gawain, “the choice is hard.” And he thought about which choice would be best, the advantages and disadvantages to each. In the end, though, he said –

“My beautiful Lady, do as you please.
I put the choice in your hands.
Just as you wish—I give you control.
Free me when you choose, for I am constrained.
I give you the choice.”

And because he honored her in this way, the sorcery placed on her by her stepmother was broken. For until the best man in England had truly wedded her, she would appear as the exact opposite of what she was. So courteous, chivalrous Gawain came to her rescue. Out of love for his king and a willingness to keep his promise he came to be with the beautiful Ragnelle.

The tale, thought to be written around 1450, reveals a great, enduring truth – the human race was built for freedom. We function best, whether man, woman, or child, when we have autonomy and the ability to weigh our choices.

The tale is also a good example of curriculum content that can serve as a springboard to teach the elements of Choice Theory. In this case, the tale could be used to –

+ emphasize the basic need for freedom.

+ identify the Caring Habits and Deadly Habits of characters in the story.

+ examine the role of gender through the centuries since the tale was written.

+ discuss the factors that can contribute to unhappy marriages.

+ consider the concept of chivalry and its relationship to the basic need of freedom.

These are just a few classroom applications from the story. I would love it if you would respond and suggest additional teaching applications. If you have stories that you are already using in this way, it would be great if you could share them with us as well.

The month of June is just around the corner and with it comes The Better Plan classes that I teach at Pacific Union College as a part of the summer school schedule. Those dates are –

The Better Plan workshops can also be scheduled at your school, conference, or district. Let me know if you are interested.