A Chair, a Glass of Water, and a Microphone – We Still Miss You, Bill

It was six years ago today that William Glasser passed away. (b. May 11, 1925 – d. August 23, 2013) For all who knew him it was a deep loss that we experienced at a heart level. His ideas impacted us in such tangible and meaningful ways and we wondered if we had thanked him enough and acknowledged the influence he had, and continues to have, in our lives. As part of my reflection today, which for me has included a few tears and many more smiles, I looked back on some of our almost 50 interviews together. I share this excerpt with you, not because of it’s earthshaking significance, but instead because of it’s joy-sparking simplicity. 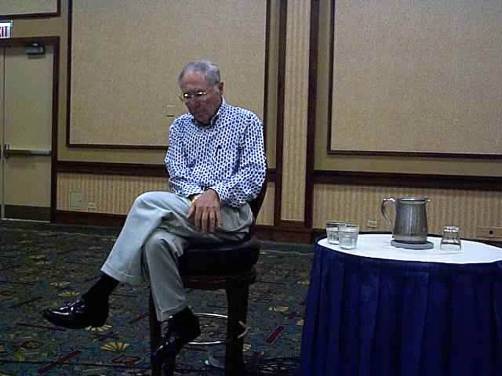 Bill Glasser, a chair, a glass of water, and a microphone

Glasser:  I was in Akron.

Glasser:  It went very well. That was the University of Akron, it was a really good talk.  I’m really honing my talk on mental health.  And, actually I’m now planning, we’re trying to set it up for the 18thof January, which is a Sunday, I’m trying to, uh, we’re gonna record some very fancy DVD recordings and bring all my work up to date with the new book Warning and everything.  And so, you’ll get those tapes, you’ll have that [stuff, too].

Roy:  Ok.  Seeing you there with the microphone (for this session I had him holding a hand-held microphone) is such a, uh .  . .

Glasser:  A common way to see me?

Roy:  A common, yeh, a very common way to see you, and actually, I’d like to maybe ask you, I was actually thinking about this on the way down today, uh, I’ve seen you speak a number of times.  In fact, it would be hard for me to count how many times. I’ve actually arranged a few of those and prior to one of your talks that I arranged, uh, I don’t know if it was you or Linda Harshman, uh, just pointed out to me that all you needed was basically a comfortable chair, a small table with a glass of water on it, and a microphone and you were ready to go.

Glasser:  Yeh, I have lots of material.

Glasser:  I never use notes.

Roy:   No, you were on closed-circuit television.  Uh, I mean, prior to the talk, do you, do you have things clear in your mind or do you kind of feel like I know this stuff well enough that I’ll go up and start talking and see how it goes?

Glasser:  I know the stuff well enough, but I usually figure out how to start. I have the first couple of sentences in my mind to get it started.  And then after that, sometimes I’m surprised what happens after that, because I believe that if I have the talk too rehearsed then I lose all the creativity that’s available to me in this subject, so I figured this out a long time ago, so I just start talking and I, it works.  And, I’m not nervous before a talk.

Roy:  Yeh, I was wondering about that, too.

Glasser:  It’s just the opposite.  I’m anxious to go.  I can’t wait til the introduction is over, you know.  (laughter)  And you know, I like the Johnny Carson introduction where somebody says, “Here’s Bill,” and that’s good enough for me, and uh, because I’m so, I’m not being .  .  .  I’m not bragging or anything, I’m just so bursting with information I want to share that I, that I, you know, when people like something I’m gonna do, they want me to do it in an hour and I suggest that it won’t cost you any more money if you give me maybe an hour and a half to start, and then, so something I was asked to do recently, we tried to schedule something .  .  .

Glasser:  People that hire speakers they, they think that no one is going to sit for an hour, you know (laughter), but my audiences sit there for longer.

Glasser:  No, I don’t really do that.  I just say it was a good talk.  Sometimes I remember that I forgot to say something I wanted to say, but the audience will never know and I don’t worry about it.  If anything, I give the audience more information than they really can deal with easily, so I don’t worry about leaving something out.  But talking is what I do.  Writing is not .  .  .   I love to write now .  .  .  writing, though, has been learned.  But talking, I started talking in 1958, when I started lecturing for the California Youth Authority, I started working there in 57, and, 56 actually. I started working at the Ventura School, and then the lectures were so interesting that Miss Perry said, you know, to other superintendents when they met me, you ought to have Dr. Glasser, so I talked all around the Youth Authority, and then, I started talking to educators also, after I published the book, Mental Health or Mental Illness.

Indeed he did start talking to educators, and what an impact he had and continues to have in that field especially. So many of the current trends – social/emotional learning, mastery learning, focusing on relevance, restorative justice, and the importance of positive relationships – can be traced back to him.

Reading this short excerpt reminds me of his energy and the commitment he had to his beliefs. He was a relentless force, a gentle force, but a force in every sense of the word. Discouragement did not derail him and doubt did not slow him. Ultimately, the excerpt reminds me to buck up and be like Bill! On this important day, may you be invited and inspired and persuaded to buck up, too. The ideas of Choice Theory and Reality Therapy are as effective as ever.

Glasser during a talk in Ventura, CA.

7 Responses to “A Chair, a Glass of Water, and a Microphone – We Still Miss You, Bill”