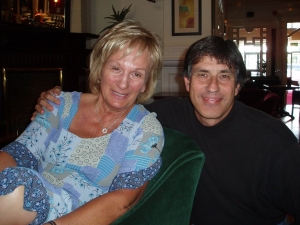 Linda Harshman, longtime Executive Director of the Glasser Institute, passed away on Friday evening, April 4. She faithfully held that position for over 20 years and did everything she could for William Glasser and his organization to be successful. Bob Wubbolding, who worked with Linda as the longtime Director of Training for the Institute, wrote that –

Many of you have undoubtedly received the sad news that Linda Harshman died at her home about 11:15 pm Pacific Time on April 4, 2014. She was with her sister Judy and her friend Frank. She was under the care of Hospice for a short time before her death.

Sandie and I spoke to Carleen Glasser today and she joins us in expressing our sadness at the loss of a very fine person. Linda was an anchor for the William Glasser Institute for many years and a dear friend to many of us.

Carleen, Sandie and I were very fortunate to visit with her about 2 weeks ago. Throughout her illness Anna Corbett and Jean Suffield frequently visited with her and cared for her. We owe them a great deal of gratitude for their unrelenting care giving and support. Also, her sister Judy from Nova Scotia provided family closeness and support as Linda approached death.

It was Linda’s wish that there be no public service held for her. Nevertheless, our prayers and thoughts have accompanied her and will continue in the future as we hold her memory close to our hearts.

And John Cooper, chairperson of William Glasser International, wrote that –

I have just learned of the passing of Linda Harshman some 24 hours ago. A sad time for everyone who knew Linda and of her support for Dr Glasser and his work.

It was just recently we heard that Linda was fighting a valiant battle with Stage 4 Cancer. The cards and messages that many people sent to Linda, in the intervening weeks were all read to her by Frank, her friend. We are advised the words of love and appreciation were well received and meant a lot to Linda. Then just days ago we learned that chemotherapy had been ceased and that she was under Hospice Care.

For those who had the opportunity to meet and work with Linda or just knew of her work it is hard to accept that one so animated, strong and energetic in administering the work of the William Glasser Institute is no longer with us. I am advised that Linda played a large part in supporting affiliates / countries as they began to establish their own institutes and that many people would like to acknowledge Linda. Such testimonies may form a part of our recognition. WGI will advise everyone what we will be doing to celebrate her life and work and how you can all contribute.

I am sure I voice the thoughts of all in sending a message that we share the sorrow of Linda’s near friends and family at this time.

I appreciate these messages from Bob and John a lot. They bring all of us together in a shared sense of loss, an appropriate grief. In that spirit I would like to add a tribute to Linda. What follows is an excerpt from the Glasser biography. The excerpt is from a very significant talk that Glasser gave in 1996.  He was setting a course for the future of the Institute, even though others disagreed with him. The disagreement had to do with school discipline plans, but that’s not our focus here. Our focus here is on Linda and the esteem in which Glasser held her. With that in mind, from the biography –

At the end of the talk he said something that really put into perspective what he was trying to say. “So that’s the dilemma we have,” he began to conclude. “On Sunday we’ll talk about that dilemma and see if we can come to some resolution that will be satisfying, but the resolution will not be that I can accept any discipline programs, cuz I can’t. If it ends up right back where it was with me and all the rest of the people go, it’ll be me and Linda and we’ll keep hammering away for the rest of our lives. I feel very, very serious about this. Because I finally recognized what my mission in life is.”

Could there be a higher tribute to Linda’s faithfulness and commitment to Glasser’s vision? Organizationally, Glasser had been walking shoulder to shoulder with Linda and knew that he could count on her, through thick and thin, come what may.

Who would have thought, even just a few years ago, that Glasser and Linda would be gone from us, having passed away only seven months apart? Their passing is a stark reminder that if the show is to go on, the baton must be passed on to others – us – who will accept it in the kind of spirit that inspired the two of them.

7 Responses to “Linda, Gone Too Soon”