Is There Any Choice Theory in Being a Tiger Parent?

Is this message to parents choice theory friendly? How should a choice theorist relate to these kinds of posters?

There are lots of choice theorists out there and I don’t presume to speak for all of them, however I do have a personal opinion on the matter. I saw this message on Facebook and noticed it had garnered a lot of likes. Amy Chua is the author of the 2011 viral book, Battle Hymn of the Tiger Mother, which many interpreted as a manifesto for parents needing to take control of their children’s lives. There was a huge amount of attention given to the book and the topic of parenting, in general. My goal here is not to share a review of the book. I will share below a seven-minute interview of Ms. Chua on PBS, because I think it captures a more complete picture of her motivation to write the book. She explains that much of what she wrote was tongue-in-cheek and that she didn’t expect her ideas to go viral in the way they did. In the end she admitted that her strategies did not work with her youngest daughter, in fact the strategies threatened the relationship between her and her daughter, and had to be softened. Check out the video and decide for yourself.

My goal as a parent is to prepare you for the future, not to make you like me.   Amy Chua

The either-or design of the statement – You can have a successful child or you can have a good relationship with him – is really a false choice. It conveys the idea that you can’t have both at the same time, which is a problem for a choice theorist, who sees the statement needing to be worded more like – My goal as a parent is to nurture a consistent and positive relationship with my child, from which I can inspire and guide him to success.

The phrase “My goal as a parent is to prepare you for the future” is really a statement about what success is and specifically, what the parent’s picture of success is. Parents that live this statement seem to be saying “I know what is best for you” and “I know how you should get to where I want you to go.” Such an approach emphasizes control, rather than influence, and children (like every human being on the planet) resist being controlled. It has been said that as long as we are connected to our children, we have influence on their thinking and behavior. Disregard that connection and focus on control at your child’s peril.

The phrase “not to make you like me” implies I actually can make you like me, but that I am willing to sacrifice this luxury in favor of your eventual success. This is inaccurate in that a person cannot be made to like anybody. A relationship can be invited, but not forced. Again, the relationship element is seen as possibly nice, but probably a distraction or worse, and thus needs to be de-valued or even eliminated.

Statements like the Chua quote seem to tap into what the reader already believes or wants to believe. It confirms a belief in the value of control, even if it means coercing behavior. People with this mindset read “Spare the rod; spoil the child” as a directive to assertively control kids into submission. They see the rod as a necessary weapon. Others, with a different mindset, see the “rod” as a gentle tool, like that with which shepherds guide and prod and nudge. 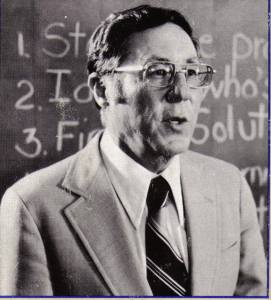 William Glasser ran into this same challenge early in his career. He emphasized personal responsibility in his groundbreaking book, Reality Therapy (1965), which was a part of a total approach that included involvement (the term Glasser originally used to convey human connection and warm relationships) and never giving up. Some latched on to the idea of responsibility and used it as a way to pressure and control kids, which was a huge concern to Glasser and caused him to pull back from the emphasis. He knew that relationships had to be at the top of the list, and that responsibility must be planted in and grow out of these relationships.

Amy Chua learned this, too, and changed her approach before it ruined her relationship with her second daughter. For those working with students, this same dynamic will play out for us, too. We can have a false sense of control or we can have true influence. We decide.

Quickly access a digital version of the Glasser biography, Champion of Choice, by clicking on the book below –