You Are Responsible. Period. Is That Choice Theoryesque?

A friend recently posted this picture on Facebook. She shared it after discovering it on Dr. Wayne Dyer’s Facebook page. What should we think and feel about this statement? A person into choice theory would have to agree with it, right, maybe even say an amen over it, yet for all the rightness in this statement there is something unsettling about it, too. We are drawn to it and repelled by it at the same time. 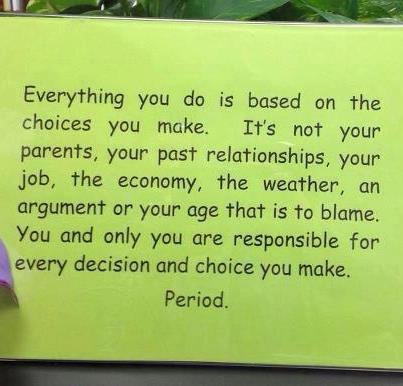 I have seen the statement before and I think it is correct to attribute it to Wayne Dyer. I am aware of Dyer’s material, but not that familiar with it. Glasser talked about him. During one of my interview visits to his house (late 2003-early 2004) he was excited to be in communication with Dyer. He described how he had attended one of Dyer’s presentations and that Dyer had acknowledged William Glasser’s presence in the audience and briefly talked about the ways in which Glasser had influenced his thinking. I could tell this meant a lot to Glasser, even though he then went on to refer to Dyer’s spiritual views as being a bit loony. At the time of my visit Glasser did a lot of communicating through his fax machine. A fax was coming in as we were going to break from the interview for lunch and I remember him thinking aloud that it was from Dyer and that he was nervous about what it was going to say. In the end, Glasser enjoyed lunch without looking at it right away because he thought it might not say what he wanted it to say. 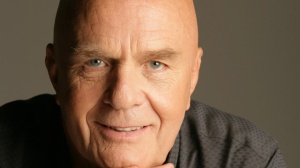 But I digress . . . back to the statement. What are we to make of it? “Everything you do is based on the choices you make,” it begins. Isnt this one of the essences of choice theory? “You are responsible for every decision and choice you make. Period.” it concludes. What could be more choice theory than this focus?

You Are Responsible. Period!

I agree with the truth in this statement, but I have to be careful where I allow that “truth” to take me. If the statement empowers me to better action, then good. If it inspires hope in me, also good. If it helps me to recognize my responsibility for my thinking and my behaving, more good. But if it encourages me to judge the poor circumstances of others as simply being the result of their poor choices, then not so good. If it keeps me from empathizing with those who are struggling or from seeking to truly understand their circumstances, and their choices, then this statement is much more harmful than helpful. 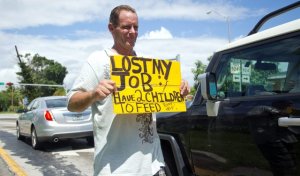 One such circumstance – that being poverty – that people have opinions about and make judgments about was recently addressed in an article with a really long title: 7 Things People Who Say They’re Fiscally Conservative But Socially Liberal Don’t Understand. What so many of us don’t understand or forget is that the cycle of poverty creates a permanent trap lasting generations. Ironically, it points out how being poor is actually more expensive than being rich. If we look at those struggling within this cycle of poverty and quickly assess that they are experiencing the result of their own choices we 1) seriously misunderstand their situation, 2) misuse the Dyer quote as an accusation, and 3) misrepresent the principles and spirit of choice theory.

I wrote on this topic a bit last October in a post entitled Compassion and Slim Choices, which described how choices and options vary greatly from one person to the next, and on how we can’t view everyone as if they have the same choices and options. Compassion is the key. The lens of compassion must be the lens through which we see others, regardless of their circumstances. Yes, people possess the ability to make better choices, but these choices are often baby-steps within an atmosphere of love and support. Looking through the lens of judgment and conveying to others in poor circumstances that they are responsible for every decision and choice they make . . . period . . . doesn’t cut it.

Choice theory does not shy away from responsibility, but first it embraces compassion and connection.

Soul Shaper summer classes at PUC are just around the corner!

Let me know if you are interested in attending at thebetterplan@gmail.com.

Soul Shapers provides evidence that Choice Theory changes people and schools into nurturing places of respect and choice. Roy shares his experience on how choice theory principles can be applied individually and collectively in educational settings, and offers practical suggestions on how true maturity begins with choices, not control and punishment. Dr. Ed Boyatt, retired educator

Soul Shapers combines the life changing clinical principles of choice theory that drive mental well-being and abundance and the spiritual principles of Christianity in a most powerful way! Tom Amato, Director of the Napa Valley Youth Advocacy Center.

Quickly order the biography from Amazon.

Jim Roy’s biography is fascinating, and this book is a treasure. I have known Bill Glasser for over 20 years and have presented at many Glasser conferences. Reading about Dr. Glasser’s journey and Dr. Roy’s clear explanations of Dr. Glasser’s points in his numerous books on psychology, mental health, and education rate William Glasser as a major contributor in each of these areas. Anyone who is interested in becoming more efficient, improving relationships, and living a happier life will truly enjoy and learn from Jim Roy’s biography of William Glasser.  Dr. Marvin Marshall

Jim Roy has done a wonderful thing here: he has captured the truth and essence of the great unsung hero of psychology. William Glasser was a maverick, a licensed MD and psychiatrist who was not afraid to stand up against an ineffectual system of mental health and tell the world why and how it does not serve the needs of the afflicted. Glasser’s life journey is described in intimate detail from his early days in practice through all of the peregrinations and struggles in, not only developing his revolutionary ideas, but in finding an audience who would listen. Today his audience is strong and committed. Why? Because Dr. Glasser’s ideas work. Choice Theory and Reality Therapy, the two components of Glasser’s mental health system, are used by thousands of mental health practitioners around the world who report surprising results among even the most dismal populations. Anyone interested in what’s behind the veil in mental health practice should find much to resonate with in Jim Roy’s excellent biography.  Banning Lary