Posts tagged “architects of our own experience”

How Emotions Are Made

I love it when research and science confirm Glasser’s beliefs, and Dr. Lisa Feldman Barrett’s book, How Emotions Are Made (2017) does just that in a big way! 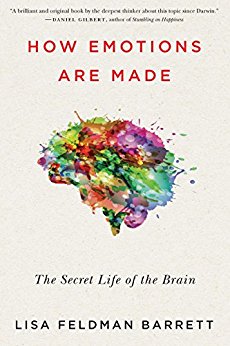 Glasser wanted people to understand the concept (and reality) of internal control, that is, that they are not controlled by circumstances outside of them nor are they victims of life’s curve balls, but rather they are the architects of their thinking and their behavior.

Glasser created the concepts of total behavior to give people insights into their choices. Using the graphic of a car, he emphasized that thinking and acting are represented by the two front tires, the two tires that a driver can directly steer and control. Glasser’s point was that similarly people can have direct control over their own thinking and acting. The remaining two parts of a total behavior are feelings and physiology, or our emotions and all the ways that our bodies come into alignment with the other parts of our behavior. He believed that we can have only indirect control over our feelings and our physiology. For him, the key was that our total behaviors throughout the day always come into alignment with each other. 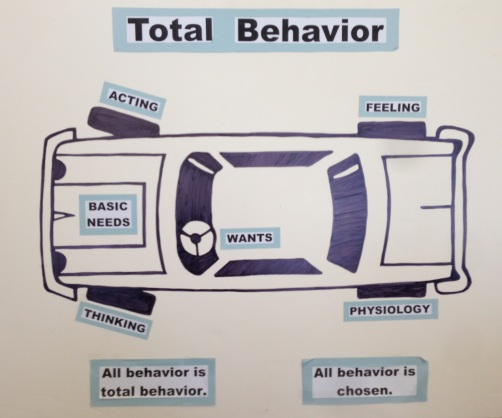 The tires on a car are used to represent the four parts of total behavior.

How Emotions Are Made does nothing to argue that point and, if anything, Feldman Barrett goes farther than Glasser in explaining that not only are we the architects of our thinking and behavior, we are also the architect of our emotions. Check out the TED talk that follows for her brief presentation –

The TED talk is good, but I want to share some quotes from the book that reveal why a Choice theorist would especially be interested in her findings.

Emotions are not reactions to the world. You are not a passive receiver of sensory input but an active constructor of your emotions. From sensory input and past experience, your brain constructs meaning and prescribes action.*

Glasser made a case for our behavior coming from within, rather than being controlled by others, and Feldman Barrett believes the same as it relates to emotions. In this next quote, she reminded me of Glasser and the way he would state the terms he really didn’t want to use – terms like mental illness, schizophrenia, and bi-polar, to name a few. Read her quote that follows and you’ll see what I mean.

Likewise, we do not “recognize” or “detect” emotions in others. These terms imply that an emotion category has a fingerprint that exists in nature, independent of any perceiver, waiting to be found. Any scientific question about “detecting” emotion automatically presumes a certain kind of answer. In the construction mindset, I speak of perceiving an instance of emotion. Perception is a complex mental process that does not imply a neural fingerprint behind the emotion, merely that an instance of emotion occurred somehow. I also avoid verbs like “triggering” emotion, and phrases like “emotional reaction” and emotions “happening to you.” Such wording implies that emotions are objective entities. Even when you feel no sense of agency when experiencing emotion, which is most of the time, you are an active participant in that experience.*

If by introducing you to How Emotions Are Made, and sharing these quotes from the book, I have ignited more questions that answers – good. I encourage you to read the book for yourself. I am convinced Glasser would have added it to his book collection, right there on his office shelf alongside other books like Mad in America (2001), by Robert Whitaker.

We’ll end the post today with this last quote, which summarizes her Glasser-like findings –

After conducting hundreds of experiments in my lab, and reviewing thousands more by other researchers, I’ve come to a profoundly unintuitive conclusion shared by a growing number of scientists. Emotions do not shine forth from the face nor from the maelstrom of your body’s inner core. They don’t issue from a specific part of the brain. No scientific innovation will miraculously reveal a biological fingerprint of any emotion. That’s because our emotions aren’t built in, waiting to be revealed. They are made. By us. We don’t recognize emotions or identify emotions: we construct our own emotional experiences, and our perceptions of others’ emotions, on the spot, as needed, through a complex interplay of systems. Human beings are not at the mercy of mythical emotion circuits buried deep within animalistic parts of our highly evolved brain: we are architects of our own experience.*

Feldman Barrett’s work will help anyone trying to better understand human behavior and motivation, and especially those of us interested in the emotional pieces of what Glasser referred to as total behavior.

* Sorry about not having the page numbers. I purchased the book on my iPad, which doesn’t have the same page numbering as the hard copy.

Human beings are not at the mercy of mythical emotion circuits
buried deep within animalistic parts of our highly evolved brain:
we are architects of our own experience.
Lisa Feldman Barrett