Behaviorism didn’t become an ism for nothing.

We are influenced by circumstantial stimuli, to events in the world around us, and there is no getting around it. Behaviorism responds to this point by saying, “Well said.” Choice Theory responds by saying, “Not so fast.”

Behaviorism, wanting more than just influence, though, goes on to claim the ability to predict behavior. In other words, certain stimuli will lead to certain behavior. Do A and you will get B. Animal trainers at Marine World, for instance, explain how the strategic use of food, like tossing a fish to a dolphin, will condition the dolphin to perform specific behaviors and tricks. 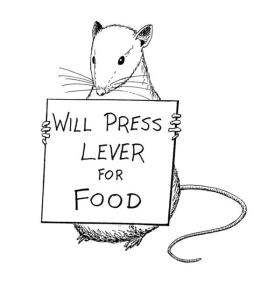 The strategies of Behaviorism have been less reliable when used on humans. Some level of success seems apparent, yet at the same time something seems not quite right.

Speaking of fish, Anne Lamott, in Bird by Bird (1994), shared an interaction she had with her son when he was small.

I was teaching Sam peace chants for a long time, when he was only two. It was during the war in the Persian Gulf; I was a little angry.
“What do we want?” I’d call to Sam.
“Peace,” he’d shout dutifully.
“And when do we want it?” I’d ask.
“Now!” he’d say, and I’d smile and toss him a fish.

This story, an admission really, invites us to answer the question, How then do we teach others, especially children, what needs to be learned? How can we make sure this important learning happens? How can we, in the words of Captain Jean-Luc Picard, make it so? Anne Lamott went on to suggest that fish tossing may have more to do with the fish tosser than the fish catcher, or even the desired behavior –

The words were utterly meaningless to him, of course. I might as well have taught him to reply “Spoos!” instead of “Peace” and “August” instead of “Now.” My friends loved it, though; all three of his grandparents loved it. Now, how much does this say about me and my longings? I think something like this would tell a reader more about a character than would three pages of description. It would tell is about her current politics and the political tradition from which she sprang, her people-pleasing, her longing for peace and her longing to belong, her way of diluting rage and frustration with humor, while also using her child as a prop, a little live Charlie McCarthy. The latter is horrifying, but it’s also sort of poignant. Maybe thirty five years ago this woman had to perform for her parents’ friends. Maybe she was their little Charlie McCarthy. Maybe she and her therapist can discuss it for the next few months. And did this woman stop using her kid, once she realized what she was doing? No, she didn’t, and this tells us even more. She kept at it, long after the war was over, until one day she called to her three-and-a-half-year-old son, “Hey—what do we want?” And he said plaintively, “Lunch.”

A live, little Charlie McCarthy. You would have to be rather old (or be a whiz at Trivial Pursuit) to understand the significance of her referring to Charlie McCarthy in this way. Through much of the 1940s and 50s, Charlie was a radio and television personality. Debonair and quick-witted, he had a real following. He was known to sit a lot, though, given that he was the ventriloquist doll of the comedian, Edgar Bergen (the father of actress Candice Bergen). Charlie may have appeared like he had a mind (and mouth) of his own, however he truly was the parrot of his talented handler. Such an arrangement with a doll made from a block of wood is fine, certainly entertaining, but Anne Lamott recoiled in horror at the thought of her little boy becoming her own little Charlie McCarthy, mouthing her words and acting her behaviors on command.

Charlie McCarthy (on the left) and Edgar Bergen.

Where is the line between teaching and indoctrinating, between learning and brainwashing, between the pursuit of ideas and the pressuring of ideas? Are some ideas so important that they require indoctrination?

Such questions bring another McCarthy to mind, that being Joseph McCarthy of the 1950s Communist witch hunt. As a U.S. senator from Wisconsin, McCarthy claimed to have a list of Communist sympathizers and spies who had infiltrated the highest levels of government, the armed forces, and even the entertainment industry. He made unsubstantiated claims and attempted to smear the reputation of people he thought soft on communism and socialism. His tactics added to the already growing fears about Russia and communism and indeed swept the country. Fear, threats and force were his preferred tools and many people were unfairly affected by his attacks. 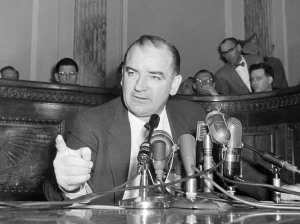 Two McCarthy’s – one a puppet that mirrored his owner and the other a politician who bludgeoned others with his ideology. The little-block-of-wood Charlie McCarthy reminds us of our temptation to craft our children into little blocks of our own making, while the-Senator McCarthy reminds us of the temptation to force others, maybe especially our children, to think and act in the way we deem best. The latter seems just as horrifying as the former.

Behaviorism and stimulus-response cannot with any level of certainty predict human behavior because humans are so .  . well .  .  unpredictable. Oh, we might be predictable now and again, but that isn’t really being predictable, is it? Some caved to Senator McCarthy’s attacks, while others stood up to him; and Anne Lamott’s son eventually said he was ready for lunch, rather than continuing to parrot about peace.

Choice Theory explains that we behave to satisfy a need, which may or may not jibe with the behaviors the fish-tossers in our life want. Better to focus on the needs of our children and then to teach them how to appropriately meet their needs. Besides helping children become self-managers, rather than parrots, getting rid of fish can improve the overall smell of things in general. 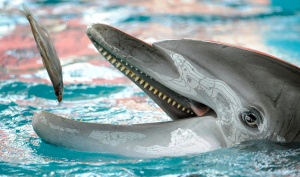 2 Responses to “Throwing Any Fish?”