So, There’s a New Deadly Habit

Not that we need another Deadly Habit. We have enough of them already. Still, in our effort to get what we want, and to just feel right (darnit), we are capable of coming up with some pretty interesting behaviors. Take “ghosting,” for example. Yes, it’s an actual behavior, and yes, it deserves to be included in the pantheon of Deadly Habits. 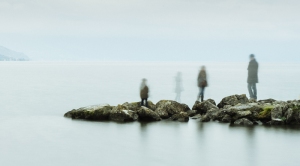 Around for centuries, ghosting was finally labeled as a social phenomena (according to one author) in 2014. In case you’re wondering about its definition, ghosting is “the practice of ending a personal relationship with someone by suddenly and without explanation withdrawing from all communication.” Originally, the term was used to describe how a person in a dating relationship one moment could disappear without a word the next moment. In this scenario, a person ghosts when he or she doesn’t want to confront, negotiate, explain, or say good-bye.

It is confusing, and even painful, when you are ghosted by a friend. It is even more confusing and more painful when it happens in a church setting, as it did to Benjamin Corey and his family. In his blog*, Benjamin, a church leader and teacher, describes how he and his family were ghosted after fellow members questioned whether or not he was “truly the head over his wife.” This, along with his stance on advocating for a higher minimum wage, his stance on loving our enemies (church members saw his message as unloving toward gun owners), and his stance against bringing guns into the church. 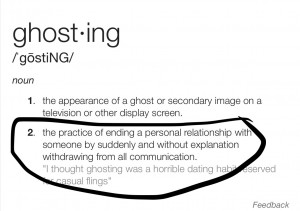 “And then it happened. Silence. Distance. Non-existence.” Close friends, people he and his family hung out with and did things together with on weekends became invisible. His children’s close friends no longer included them. Their social and spiritual network was laid waste. The Pharisees of Jesus’ day threatened to ostracize people from the temple and all religious life if they didn’t think and behave the way the Pharisees demanded. Such a threat was taken seriously because being a part of the community meant everything, even survival. Such ostracization strategies continue today.

When a person close to us – a spouse or child or relative – doesn’t behave as we want, or when others in our life – co-workers, fellow church members, a driver on the road beside us – behave in a way that upsets us, we have a choice as to how we will respond. If we view the world through “reward and punishment’ glasses we will call on behaviors that attempt to make or force the other person to behave according to our expectations, or that at least give us a shot of brief satisfaction for expressing our anger or disgust. Reward and punishment behaviors are known, according to Choice Theory, as Deadly Habits and include behaviors like Criticizing, Blaming, Complaining, Nagging, Threatening, Punishing, and Reward to Manipulate. They are called deadly because whenever these behaviors are used they are damaging, and even deadly, to the relationship. When I was younger my go to Deadly Habit was Withdrawing, which is form of Punishing. After reading Dr. Corey’s blog I will now include Ghosting as another form of Punishing. 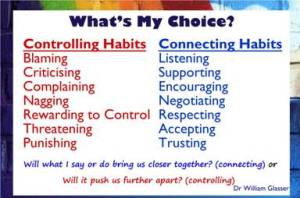 Fortunately, there is also a list of Caring Habits, too, which I hope would especially be present within the behaviors of a church family. Maybe Benjamin Corey not have having control over his wife and not wanting guns in the church is a deal-breaker for people within that congregation, yet isn’t it possible to talk about this difference in views and separate amicably, rather than by inflicting such pain? The church, of all places, needs to teach and model Caring Habits, which prioritize relationships, and which include Listening, Encouraging, Accepting, Supporting, Trusting, Respecting, and Negotiating Differences. We will not always agree with others, but we can choose to respond in a way that at least maintains the relationship.

It is especially toxic when externally-controlling ways are combined with religious views. It adds to our authority when we claim that God thinks like us and when we claim to be doing His will, but we misrepresent Him when we try to control others. For more on this topic, check out the following links –

Stuffing God into a Box

Religion and the Only Person I Can Control

Why Are So Many Christians Un-Christian?

One Response to “So, There’s a New Deadly Habit”