Cancer and “How Should I Live My Life Now?”

I don’t know how many of you will take the time to watch Jeff Tirengel’s talk about his life as a cancer patient, but if you do you will be emotionally moved and your thinking about life will be deepened.

I thought about titling this blog post, Cancer and Choice Theory, but this talk can’t be pigeon-holed that neatly.

Pretty much all of us have been affected by cancer, either personally or by its affect on family and friends, and I believe Jeff’s story will be a help to each of us, whatever our involvement with it may be. His calmness, his humor, and his brutal candor all contribute to the power of the talk.

Jeff is a dear friend, so I was naturally drawn to his story. However, as I began to watch and listen it became more than a friend thing. The content is powerful on its own merit.

Jeff believes in the ideas of choice theory, yet there is no pressure in this talk, not even an invitation, for you to believe in choice theory, too. In giving this talk he is doing something much more important than preaching.

Jeff was a personal friend of Glasser and continues to be friends with Carleen Glasser, who was in attendance at the talk. I first met Jeff when we were in the same reality therapy/choice theory certification class in 2003 and we have stayed in touch ever since. He weaves choice theory principles throughout the talk, especially the basic needs.

I mentioned Jeff in a special blog from last year, the one entitled The Rest of the Story, Pt. 2, which was posted on Sept. 5, 2013. Check out this video and you will come to understand why I treasure Jeff. Many of you have loved ones and friends you treasure, too. I have a feeling Jeff’s story will resonate with you as deeply as it did with me. 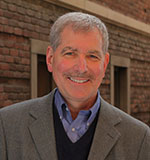 Jeff Tirengel, PsyD, MPH is a Professor of Psychology at the California School of Professional Psychology at Alliant International University. He also directs psychological services for the Preventive and Rehabilitative Cardiac Center, Cedars-Sinai Heart Institute. Dr. Tirengel began his career in Washington, DC, serving public and private organizations including the U.S. Office of Disease Prevention and Health Promotion and the National Association of Community Health Centers.

6 Responses to “Cancer and “How Should I Live My Life Now?””