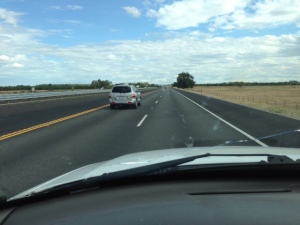 This past Friday I headed north on Interstate 5 to be a part of a reunion for my wife’s extended family. She had gone up earlier in the week to help her mother and to get ready for everyone’s arrival, so I was driving there by myself. I usually drive pretty reasonably as far as speed goes, however on Friday I decided to try and get there a little quicker, maybe even see how fast I could get there without any of the common stops we usually make.

Traffic, as is almost always the case on Interstate 5, was moving right along. A car in front of me in the fast lane wasn’t going as fast as I would have liked and I moved into the right hand lane to go around him. As I did so, though, the car sped up. I went a little bit faster to get around him, but he sped up even more. At this point we going over 80 mph. It was plain to me that he didn’t want me to pass him. He stayed out in front, which was fine with me. I had no desire to turn it into some sort of competition, and best of all, I now had a blocker in front of me. If you are driving a bit faster, it is good to have someone clearing the way in front of you.

Later on I thought about this little event as a choice theory moment — in reverse. He reacted to my wanting to pass and ended up driving at a speed that was more of my choosing, than of his. It was like he had given me the power to control his speed.

We hear phrases like “pushing his buttons” or “yanking his chain,” which linguistically captures the process of one person messing with another’s boundaries or preferences, especially when pushing buttons leads to an entertaining reaction. I must have pushed the other driver’s button when I attempted to pass him. In the end, I got better in return than I intended.

Children and adolescents, especially those with anger management issues or low frustration levels, can be helped by examples such as these. Kids seem to “get” that when they are reacting to a classmate’s behavior in a way that leads to trouble or embarrassment, they are actually giving their power away to the classmate who did the button-pushing. I have seen the light go in a student’s head when they begin to realize that they don’t want to be a game piece on someone else’s chess board. They want to decide how they are going to act, rather than letting someone supposedly dictate their behavior.

This is an important reminder for all us, regardless of our age. If you have “buttons” featured prominently in your demeanor, why not get rid of them? If you have a “chain” that people keep yanking, how about losing it once and for all? It’ll be great for you, and as you model being in control of your life in front of your children or students, it will be great for them, too.

I am very thankful how well the Soul Shapers 1 class went this past week. What a great group of people! We indicated our desire to stay in touch during the coming school year, and I hope we do that. The Better Plan blog is one way we can all keep choice theory in our thinking and stay connected in the process. Soul Shapers 2 is taking place this week.