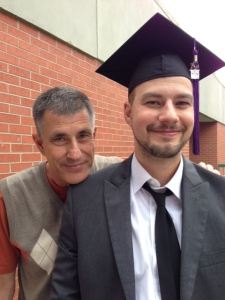 My son graduated from law school today and this event, in its own way, brings up warm memories of my friend, Bill Glasser.

Jordan was never much enamored with traditional teaching methods, although learning has always been important to him. During his middle school years he was drawn to music and has poured a lot of his abundant creativity into his guitar, keyboard, and drums ever since. After graduating from high school he was not very excited about college and continuing the whole school thing and seemed intent on heading out on his own, even if the heading out involved elements that to me were short-sighted, unrealistic, and even dangerous.

By the time Jordan graduated from high school in 2001, Glasser and I had become friends. The Glasser Institute (its name at the time) was doing quite a bit of training on the Pacific Union College campus and Glasser was on campus a number of times over a three year period. I had shared with him about Jordan and some concerns I had and he expressed an interest in talking with Jordan, which Jordan was open to as well. After his time with Jordan, Glasser assured me that Jordan was fine and that he was going to be fine in the future.

I felt that Jordan would be fine, too, although the routes that Jordan chose at times created questions in my mind. He did do the college thing for a while, but with just a year left to finish his social work degree, he headed off to New York City to pursue his music and to .  .  .  well .  .  . experience New York City. NYC is not the easiest place to survive, yet he did so, on his own, and he re-enrolled in Brooklyn College and finished his undergraduate degree. I think he was in NYC for close to seven years.

Not too long after Jordan connected with Glasser, I began my doctoral program, which eventually led to my doing a dissertation on the development of Glasser’s ideas, which then led to my becoming his biographer. Starting in 2003 Glasser and I had a lot of time together, sometimes during formal interviews and sometimes just visiting about life. He would frequently bring up Jordan, interested in how he was doing and what the latest was with him. “He’s gonna be fine,” he would point out. I appreciated his interest and his confidence in my son.

I wish I could call Bill today and let him know that Jordan is more than fine; that he’s married; that he and Katy own a food truck; that they grow a lot of their own food; that they have six chickens; that Jordan continues to love his music; and that he graduated from law school. Bill would celebrate with us today. I feel that he was a part of Jordan’s journey.

Someone said to me today, “You must be very proud.” I replied that I don’t think pride is the word that describes my feelings. I explained that I am very happy for Jordan and that I am impressed with what he navigated to achieve a degree in law. To me, “being proud” has to do with his accomplishment somehow meeting my needs. I want to be careful not to go there. Maybe I am too sensitive about this (a result of choice theory, I think), but I don’t want to convey that something he has done has increased his value in my eyes. I was proud of him before he entered law school and, yes, I am proud of him afterward, but not because of the degree. I am proud of him for the man he has been becoming for quite a while now.

So, it is a big day for our clan and I wish Bill could have been a part of it. Somehow, I think he knew a day like this was coming for Jordan. Thanks again, Bill, for your belief in Jordan, and Jordan, dude, way to go!