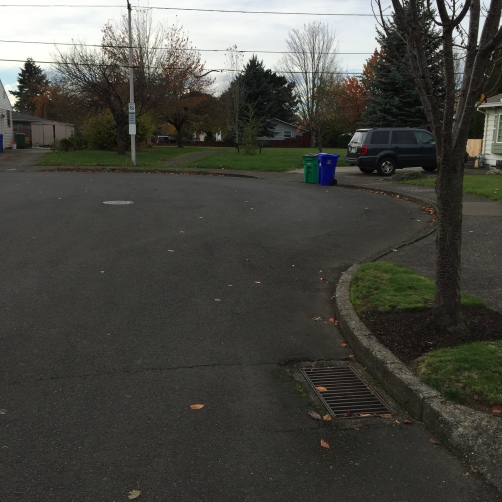 Sophie Sims-Stapleton turned onto her street and could see them as plain as day. It wasn’t day, of course. It was actually twilight, the evening fast approaching as street lights started to come on, the darkness slowly draping the neighborhood. Her commute had taken a bit longer this evening, which had prompted her to abandon her plans to stop at Safeway on the way home, but even in the twilight she could clearly see them. All three of them, standing in front of her house like sentinels – the brown one, the green one, and the blue one. Except they weren’t sentinels; they were trash cans, standing somewhat askew after the trash truck had emptied them with its robotic arm and unceremoniously dropped them back onto the pavement. And now they were chiding her with a message as clear as their bold colors, that message being, You don’t matter!

As she neared the house she could see her husband’s car already parked in the driveway, which seemed to grind salt in her festering wound. Hadn’t she and Greg, her husband, talked about this at length last week, after the cans had sat in front of the house for three days following trash day, both of them expecting the other to bring the cans to the side yard where they were stored during the week. The two of them had quietly and sullenly dug in, both acting like they hadn’t noticed the cans in front of the house, even though it was difficult to park with them sitting where the trash truck had ditched them.

“Why can’t you just bring them in?” she pleaded. “You usually get home first.”

“I usually do,” he retorted, “but why can’t you bring them in once in a while? I help around the house, seems like you could help with some of the outdoor stuff now and again.”

Truth be told, she felt that her job was more stressful, and basically more important than his, and that he should pick up more of the chores at home. It bothered her that he could act, through his ignoring of the trash cans, like he was somehow equal to her. He had reminded her of the things weighing on him at work, as well as at church, with all the time he was donating to the needs of the building committee, and she had momentarily relented, even as she harbored a sense of resentment toward his laziness and stubbornness. In the end, they had gone out and brought in the trash cans together, which kind of felt good, like they had solved a problem through communicating and respect.

Yet now, just a few days later, the trash cans once again were askew in front of the house, with big grins on the front of them (at least as far as she was concerned), driving home the point that her needs didn’t matter. As she navigated around the blue recycle can to park in her usual place, her thoughts were not positive.

I kind of hate him, she thought to herself. Why can’t he just bring in the freaking trash cans? Seeing his car parked in its usual place she got even angrier. He’s been home for how long? A half hour? An hour? That’s plenty of time to bring in a few trash cans. Jeez! Why do I have to nag him? His laziness makes me crazy!

The thought occurred to her to bring in the trash cans herself, but she responded gruffly to such an idea. That would be totally non-supportive of her goal. There are responsibilities for which he needs to step up to the plate, and this is one of them. She laughed at herself for even entertaining the thought of bringing the cans in herself. True, during last week’s discussion on this very point she had agreed that sometimes she could bring in the cans, too, but she pushed this memory aside now. Instead, the thought occurred to her to place one of the cans directly behind his car so that he would have to move it in the morning.

The front porch was dark, which added to her anger fuel. If he gets home first, can’t he at least turn on the porch lights as a courtesy to others that come home later? How did I marry this jerk? What was I thinking?

She put the finishing touches on her anger and frustration, all of it completely merited and defensible, as she covered the final steps to the front door. Which persona to be she wondered as she unlocked the door – should I go with lashing-out anger or should I go with the silent treatment? Full of appropriate disgust she entered a dark house. What’s going on? she thought.

“Greg,” she called out. “Greg,” she tried again. But only silence in return. What in the world?

And then a memory slipped across her mind. Her brow furrowed as the audio memory tape in her brain wound into position. She almost declined to press the play button, but her brain seemed to have an automatic play option. Faintly, but growing stronger, the tape said, Honey, I will be home late tonight. Roger is picking me up in the morning, as we have a joint meeting in Forrest City tomorrow for work, and then we are both part of the special board meeting this evening at the church. It may be close to 10:00 when I get home. She recalled the look on his face as he explained his schedule, the way he regretted being away from her for the evening, and a pang of awareness began to overtake her.

She turned the kitchen light on and immediately saw the note he had written, after she had left for work.

Just a reminder that I will be home late tonight.
More meetings at the church.
I’ll get the trash cans in when I get home, though.
Love, Greg.

She stared at that simple note for a long time, her eyes growing wet as the recognition regarding her own anger became clearer and clearer. A tear dropped on to the note, quickly blurring the ink of trash and cans. She had created a story and nurtured it into a reality that she had fully embraced. Her reality had led her to think terrible things about her husband, but she was beginning to see that she had made it all up. All of it. For some reason, she realized, her version of reality applied the worst interpretation to Greg’s behavior, while applying the best interpretation to her own behavior. Another tear dropped onto the note, this time obliterating the word Love.

That can’t happen she thought to herself. Our love can’t be so easily blurred. And with that she returned to the entryway, turned on the porch light, and headed into the night air to get the trash cans and put them away.

It is true that reality influences our perceptions. Our circumstances can affect any part of our total behavior – our thinking, our acting, our feelings, or our physiology. Information and events external to us may or may not matter. A ringing telephone, as Glasser used to say, lets us know that someone wants to talk with us, but it can’t force us to answer it. An angry, threatening person may convince us to comply with his demand, or it may not. We decide. In fact, we make a ton of these decisions every day. Circumstances constantly hit us with data; we process the data and decide how to respond.

It is just as true that our perceptions create our reality. In fact, this may be one of the most important of the elements of choice theory. It is probably more accurate to say that our embraced perceptions create our reality. When we settle on a value or belief, everything we experience passes through our values filter. The result of this filtering is our version of reality. Our actions are always based on our view of reality, so the importance of this process cannot be overstated.

It can be hard for some to come to grips with the idea that people create their own version of reality. Reality is reality, some say; it isn’t a matter of opinion. For each of us, though, reality is formed in the frontal cortex of our brains, which continuously takes in millions of bits of information and turns it into pictures and sounds and smells. A danger lurks in the belief that our personal pictures and sounds and smells represent total, all-knowing, crystal-clear reality. Such a view cannot tolerate new information and limits itself to shrunken interpretations. Sophie had embraced faulty pictures of Greg, but she was able to admit this when new information corrected her version of reality. This is not always easy to do – Has anyone’s mind been changed, for instance, because of all the political information and articles being shared on Facebook as Election 2016 nears? Exactly, we choose to ignore some articles, even as we consciously click on links to other articles we consider more trustworthy or accurate. Having values is fine, even preferable, but staying open to new information is a healthier state of mind.

Just remember not to jump to conclusions when you round the corner and see those pesky trash cans still sitting out by the road.