I don’t make this stuff up. One of the sidebar titles in the recent edition of Time magazine (January 25, 2016) read How to Parent Like an FBI Agent. “Some spycraft techniques also work for parenting,” says a former FBI special agent in his new book, The Like Switch: An Ex-FBI Agent’s Guide to Influencing, Attracting, and Winning People Over.

1
Create the illusion of control
FBI agents de-escalate drama by letting subjects call some shots.
Offer kids a list of options, all of which you already like.

2
Use the scarcity principle
FBI profiling shows that people like things they can’t get much of.
Parents should factor that in when banning an activity or a friend.

3
Ask indirect questions
Kids (and perps) hate being interrogated.
Instead, try queries like “My friend’s son was drinking. What should his parents do?”

4
Hang in there
The more time you spend with a person, the more influence you have on each other.
Yes, even on teenagers. 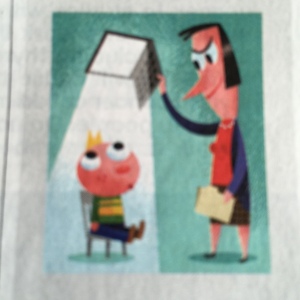 Parenting might be the most challenging of all human endeavors, and remarkably we don’t have to receive any training or pass any performance assessments to become one. As a result, parents are usually pretty desperate for tips and ideas on how to parent better, even when the advice is from law enforcement agencies. (Maybe especially when the tips are from law enforcement.) So what are we to make of these four FBI recommendations? What follows are thoughts through the lens of choice theory.

Create the illusion of control
Choice theory is about truly empowering others. Parents and teachers must share power in age-appropriate ways that leads children to ultimately become able self-managers. There are no illusion strategies in choice theory, no tricky ways to exert control, even as you are acting otherwise. Kids seem to possess excellent “manipulation detectors” and will sooner-rather-than-later sense when they are being coerced into certain behaviors.

“Creating the illusion of control” underscores one of the challenges for teachers. It is no easy thing to shift from wanting to control kids to wanting to coach them into controlling themselves. Choice theory offers understanding and a skill set to help with this shift, but old habits do not die easily.

Oh, my goodness! What can I say? When we talked about this in the Soul Shaper class I didn’t really think it applied to me. I recognized how external control I had been up to that point and I was fully convinced of the value of choice theory and the need for me to make a change – both at home and in the classroom. But thinking this way within the confines of the Soul Shaper classroom and applying it a couple of months later in my own classroom are two different things. I just didn’t appreciate how steeped I was in my need to control! During the Soul Shaper class, Jim Roy would talk about teachers taking the internal control ideas of choice theory and then using them in externally controlling ways in their classroom. We all laughed at the irony of that possibility, never thinking for a second that we were capable of that. Now I know different. I am capable of it, in fact, very capable of it. I started seeing the ways in which I shared the least amount of control possible. In other words, I gave out just enough for the kids to maybe think I was giving them a choice, when I was keeping all of the real keys to power. One thing I have learned during this process is that choice theory really gets to the heart of who I am and what makes me tick.   Sophie T.

Choice theory is not about illusion; it is about authenticity and honesty. It isn’t about fake power; it is about really empowering others.

Use the scarcity principle
Instead of saying “use the scarcity principle,” a choice theory parent or teacher would say “be aware of the scarcity principle.” I agree that withholding something or taking something away from a person tends to increase the desire for that very thing. This is one of the drawbacks of traditional punishment strategies that are based on the removal of privileges, and if that doesn’t work “we’ll just remove more privileges.” Trying to control a person through punishment almost always backfires. Choice theory reminds us, whenever possible, to replace things that have been taken away with viable alternatives. Without new things or alternatives to take the old behavior’s place, it is much more difficult to introduce and maintain the new replacement behavior.

When my kid basically left home at 19 I was shocked. I thought things were pretty good between us. What I didn’t realize was how accommodating he was as a child. I was controlling and even angry, but for years he did what I told him to do. When he got old enough to do what he wanted to do, he kind of flipped me off and left. It killed me, but I couldn’t really blame him. It was my way or the highway and he took the highway.   Carl M.

Ask indirect questions
Questions are good, especially artful questions that help a child or student to self-evaluate and then form a new behavior plan. As I have said before, it is better to get something out of someone’s mouth than it is to put it into their ear. The key lies in the spirit of our questioning. Are our questions more accusation than inquiry; more interrogation than problem-solving? Are we listening to correct and censure or are we listening to understand? Indirect questions are by nature less confrontational and seem to invite discussion rather than argument.

Hang in there
When I saw the phrase “hang in there” I was reminded of the Reality Therapy principle of Never Give Up. This principle, though, has more to do with than simply spending time together, as the FBI approach seems to indicate. Our ability to influence is more about the quality of our connection with our child or student than about the amount of time we spend together. When asked how long “never give up” means, Glasser wrote that “each of us must define ‘never’ for ourselves, but a good basic rule of thumb is to hang in there longer than the student thinks you will.” I don’t know if this is the best explanation for never give up. For me, it means just what it says. As long as another person is willing to keep trying, to consider a new plan, I think I would want to keep trying, too.

The words kids and perps appearing in the same sentence should alert us to a possible conflict, although a good sentence might be – The better we treat kids, the fewer perps there will be.

2 Responses to “How To Parent Like An FBI Agent”