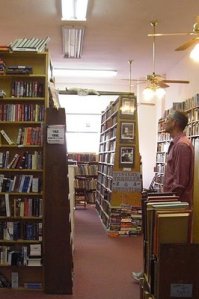 For almost a year there has been an old book on top of one of the stacks on my bedside table, and even though I haven’t read it, my love and belonging and power needs are met every time I see it.

Glasser and I talked about a lot of things as I wrote his biography. During our interviews he would frequently bring up what he happened to be reading at the moment. He read a lot. Sometimes he would talk about an article he read in the New Yorker; or about an editorial in the Los Angeles Times; or about a book he was reading. When we visited about his childhood he described how much he read even then.

As a child he especially liked a group of books known as The Young Trailers Series. He spoke fondly and respectfully of the Young Trailers author, Joseph Altsheler, and about how he could really write adventure stories, tales that required resourcefulness and bravery. He read these books so many times that he could not remember the exact number. I had never heard of them or the author, but became curious about them due entirely to Glasser’s enthusiasm. I did some checking, figuring that I would just go to half.com or Amazon and pick up one or two of these books, and discovered instead that getting my hands on an Altsheler book was not as easy as I thought it was going to be. If I was willing to part with $200 I could have one mailed to my house. Otherwise I would need to begin searching the occasional used bookstores I was able to frequent.

Looking on my bookshelves now, I am reminded of the different books that Glasser alerted me to, and that I was able to find at used bookstores here and there. Books like Jesse Stuart’s, The Thread That Runs So True (1949), and Ernest Kurtz’s, Not God: A History of Alcoholics Anonymous (1979). He loved anything that Anthony Trollope wrote, who he felt could really get inside a character and what he or she was thinking. I don’t have any of Trollope’s books yet, but I probably will someday add a few of his books to the Glasser section in my library. I go to a used bookstore in San Luis Obispo, California, at least twice a year and while browsing there a few years back I discovered an old copy of Glasser’s all-time favorite book, Raintree County (1947), by Ross Lockridge, Jr. “I’ve read that book at least seven times,” he shared with me, which is no small feat considering it runs 1,060 pages long. When I took it to the counter to buy I thought it might be kind of expensive, but it wasn’t. Didn’t they know it was William Glasser’s favorite book?

Not all of Glasser’s recommendations were of old books. For instance, he convinced me that I needed to go out and buy a book by Mark Haddon called The Curious Incident of the Dog in the Night-Time (2003), an incredible book with an autistic savant as the hero of the story. He also convinced me on books like Mad in America (2002), by Robert Whitaker; America Fooled (2006), by Timothy Scott; and especially Beyond Prozac (2005), by Terry Lynch. For those years that Glasser and I worked together he seemed to be with me whenever I went book shopping, be it in a Barnes & Noble, a used bookstore, or online. My experience was that he had a good eye for reading material.

I had kind of given up on finding any of Altsheler’s books, although last year when I was in a used bookstore in Nevada City, California, and discovered they had a kid’s section, I decided to look more carefully. There could be a chance. And then, as I looked from book spine to book spine, there it was. There was The Forest Runners (1908), by Joseph Altsheler. I opened and closed my eyes to make sure I was seeing correctly. I looked inside and saw that it was the second book of eight in The Young Trailers Series. I wondered about its price as I approached the cash register. I was told it was $18 and that it would come to almost $20 with tax. I got the $20 out of my wallet so fast the bookstore owner must have been tempted to say, “Wait a minute, now I can see the price more clearly. It’s not an 18, that’s an 80. I meant to say $80.” But he didn’t and I left with a special treasure.

The Forest Runners has sat on my bedside table ever since. I haven’t read it and I don’t intend to soon, yet I feel good every time I see it. I feel a connection to Bill and remember his joy and excitement as he described things the book’s characters overcame. My oldest grandson is three and a half, so he’s not ready for swashbuckling adventure yet, but when he is I know of a book we can share together. (Oh, bother. How am I going to find the other seven books in the series?)

Interested in stories about Bill Glasser? Glad for choice theory tips on how to live a happier life? Appreciate ideas on how to bring choice theory into the classroom? Then why not pass it on and tell a friend or colleague about The Better Plan blog.

Remember the new 2103 – At A Glance link at the upper left hand corner of the page when looking to catch up on topics from last year. Quick links to all the articles are chronologically listed.