Before the Seminar Even Began

“How do you think I can make my wife do what I want her to do?” He said it louder than he needed to, but he wanted to get the attention of the man on the other side of the registration table.

“I don’t know. How do you get her to do what you want her to do?” The man behind the table replied.

“No, I’m asking, how can I make my wife, and my kids for that matter, do what I want them to do? That is what this seminar is about, isn’t it?” 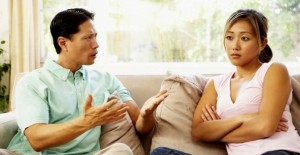 The man behind the table looked at the questioner for a moment, studied him actually, and finally replied, “Well, the seminar is about having a better marriage . . .”

“Exactly,” the questioner interrupted. “That’s why I’m here. I want a better marriage.”

“How did you find out about the seminar?” the table man asked.

“A friend told me about it, said I should check it out. I had been complaining to him about my wife and kids and he said this seminar might help. So here I am.”

“How so? What’s interesting?”

“I like the sound of power,” the questioner again interrupted. “That’s why I’m here, like I said.”

“ . . . although this power, the power we’re learning about this evening, is about the power we have within us to not be controlled by our negative thoughts and feelings . . .”

“Excuse me,” the questioner questioned.

“It’s about being free to be who we really want to be, rather than being controlled by circumstances.”

“So what are you saying? You’re not going to show me some tricks to make my wife do what I want her to do?” The questioner’s concern was evident.

Eyes still locked, “Can I get my money back?” The questioner thought he had heard enough.

The countenance of the man behind the table changed and his tone changed as well, “Look, sir, I’ve had enough! No, you may not have your money back. Now get yourself into the meeting room and find a seat on the front row!” With anger and disgust he moved toward the questioner and handed him a packet of materials. “Go on, get moving!”

The questioner was taken back, for just a moment on his heels and retreating, yet he quickly recovered, his face becoming set in his own anger and defiance. The two of them now were only feet apart, both obviously frustrated and angry, the packet being held out by one of them, the other refusing to reach out and receive it. Their eyes again locked, the silence between them spoke volumes.

The questioner was trying to process what was happening to him. His mind and body, which quickly had gone into an angry, defensive mode, now slowly began to relax. Yet he wasn’t sure he wanted to relax, wasn’t sure it was safe to relax. “What are you talking about?” he replied with a touch of disgust in his voice.

The questioner thought about this, a light ever so slowly dawning somewhere in his mind.

“Deep inside you, in the depths of your soul, you want to be close, really close, to your wife, and you want your kids to want you and to want what you can offer them. You just experienced how a person thinks and feels when force and power are used on them.” The man behind the table quit talking as he saw the questioner’s eyes become filled with liquid sadness.

“Look, we don’t need to go through the whole seminar before it even starts. But I’ll just share a few of the key ideas we’ll be learning about. One of the things you will learn is that the only person you can control is you. That idea alone has pretty incredible implications. We’ll learn about habits that bring us closer to the ones we love and on the other hand, habits that hurt our relationships with others. And another thing we will learn, and this will be of special interest to you, is that as long as we are connected we have influence. That’s why our connection to our children is so important.”

The questioner was listening now, bringing it all in.

“A few moments ago,” the table man continued, “when I tried to make you do something, the connection between us was definitely hurt, on the verge of being broken.”

The questioner nodded in agreement.

“I wanted you to attend the seminar, but you wanted the exact opposite.”

“I was outta here,” the questioner agreed. “I was getting angrier by the second.”

“So that’s the point. The seminar is about how ineffective it is to try and make people do what we want them to do. It hurts our relationship in the process and we usually don’t get what we really want.” The table man thought for a moment. “The fact is that if you want your money back, and not attend the seminar, well, you can make that choice. You have that option. But I just want you to know how much I want you to be a part of it. I think you will benefit, however it strikes me that the rest of us would benefit from your being here as well.”

The questioner now smiled just a bit himself and reached out and took the packet of materials. “It looks like there is still front row seats available,” he said as he looked toward the almost empty meeting room.

This post is a re-print and first appeared on December 19, 2015. Quickly search the Year At a Glance links for easy access to many other posts on teaching, raising children, marriage, leadership, mental health, spirituality, and much more.

2 Responses to “Before the Seminar Even Began”