Instead of heading west back to California after the Glasser conference, Maggie and I headed a half hour east of Toronto to the city of Oshawa. Oshawa is special to us for a number of reasons – I got my first teaching job as a physical education teacher at Kingsway College in Oshawa; it was really the first place Maggie and I lived after getting married; and our daughter, Rachel, was born there. I was 23 when I began teaching and Maggie was 21. How could we have been so young, so ready to tackle a new place, so naïve in so many ways? We left Oshawa and moved back to California in 1980, so it has been 34 years since I last saw the campus, and since I saw some of the good friends we made during our time there.

I am not at the end of my career yet, but I can see the end beckoning to me from my present vantage point of being a couple months short of 60 years old. To be able to go back and visit the place in which my career started was special, a kind of magical doorway into the past.

Me and the gym, together again after 34 years.

The old building I am standing in front of was the gymnasium. It was old when I first arrived at Kingsway, too, but I was so excited to have a gym I could call my own. I remember painting the entryway with a fresh coat of paint, with a burgundy stripe that added life to the space, and then tearing up the old carpet in the entryway so that tile could be installed. I was proud of the improvements, glad that others on campus would see that the gym was important enough to update. I peeked in the doors and could see that those improvements had become distant memories. The entryway is now completely black, a worn out space leading to what looked like a storage area. (Just in case you’re wondering, a wonderful new gym has been built to replace it.) 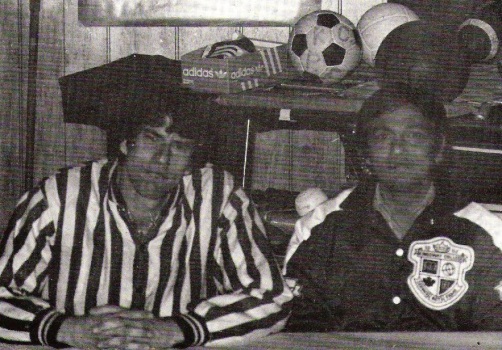 Me when I first began teaching at Kingsway, in my referee jacket. Ralph Jurianz is on the right. We were student association sponsors that year.

Besides seeing the campus, it was even better re-connecting with friends. Kurt and Anne Cao arrived at Kingsway in 1978, the same year I arrived. They were experienced teachers from Monterey Bay Academy; me, not so much. Kurt was the new boys’ dean and Anne taught part-time in the physical education program with me. Seeing them again recalled how much they meant to us, a young couple just recently married and in a totally unfamiliar environment, and to me, a brand new teacher just beginning to find his way.

In those early days I had not heard of choice theory yet and had not identified what it even meant to be a progressive educator. A readiness for progressive approaches was somewhere down deep in me, but I had not yet started to build on that foundation. Being with Kurt and Anne, though, memories began to flood back regarding their mentoring of me. Anne helped me develop the structure that was needed to teach multiple classes and run intramurals. And Kurt modeled to me the kind of love, patience, and commitment that really supporting students required. He would frequently involve me in dorm events, and sometimes even dorm challenges. So many times I saw him patiently working with students, teenage men, sometimes from dysfunctional backgrounds, often with so few emotional tools to navigate adulthood and responsibility, patiently trying to help them understand that they have choices. I have a clear memory of Kurt and I walking across the football field one night, walking back from my house to the dorm, talking about the challenges at the school that year. I was frustrated with some of the students and was ready to talk about how we could make them get into line, yet I remember Kurt, rather than grousing about their behavior, expressing how much he cared about the guys in the dorm and how he only had four months left to reach them. Other teachers and staff might have been yearning for the school year to get over and send the kids home, but Kurt was treasuring every day left in the school year as one more opportunity to connect with students and help them.

I had forgotten that moment, that dark and cold evening, until I saw Kurt again. Now that moment floods back and I recall how significant it was to me. Years later I would be introduced to the concepts of a Glasser Quality School and choice theory. Something in me would resonate at a very deep level with those concepts, and I would eventually embrace them as a way of life. I would forget, though, until now, how maybe, just maybe, there were moments in my past, people in my past, that prepared me to desire and resonate with choice theory ideas, that had prepared me to see the importance of connecting with kids, and acknowledging their need for power, freedom, and fun. Before I became familiar with a movie character named Yoda, I was fortunate to have Kurt as a kind of Yoda in my life.

Jim and Yoda. I’m wiser; I don’t think Yoda can get any wiser, can he?

Also years later I would meet another Yoda, a guy by the name of William Glasser, and my journey would continue. I would add pieces to my thinking and beliefs that would build on moments like those on that cold, dark football field, that faraway galaxy from a long time ago. I’m still adding pieces.

I don’t know if Kurt remembers that football field moment, and I don’t know if he recognizes his Yoda-like qualities, and that is why I am sharing this with you. You could be a Yoda to someone right now, and like Kurt, not even realize it. You could be a Yoda to someone just learning about choice theory for the first time, or maybe to a young teacher finding his or her way, or maybe to a friend admitting he or she wants a better marriage. Stay the course with choice theory. You never know who is watching and listening.

Got home last night from Canada and will be filling the book orders placed at the conference today or tomorrow at the latest. I will also be setting up a way to sell signed copies of the Glasser biography right here from the blog. Stay tuned.

Please add a book review of Champion of Choice to Amazon.com. It doesn’t have to be long and it will make a big difference!

2 Responses to “Yoda on a Cold, Dark Football Field”